Three paralysed men, who were told they would spend the rest of their lives in a wheelchair, are able to walk again thanks to doctors in Switzerland.

An electrical device inserted around the men’s spines boosted signals from their brains to their legs.

And it also helped damaged nerves in the spinal cord to regrow.

The researchers hope that this unexpected bonus will enable some paralysed people ultimately to regain independent movement.

BBC News has had exclusive access to the patients in the clinical trial, the results of which are published in the journal Nature.

The first patient to be treated was 30-year-old Swiss man David M’zee, who suffered a severe spinal injury seven years ago in a sporting accident.

However, thanks to an electrical implant developed by a team at École Polytechnique Fédérale de Lausanne (EPFL), he can walk more than half a mile with the implant turned on.

As I strolled with him on a cloudless sunny day in the foothills of the Alps overlooking Lake Geneva, he told me how the ability to walk, albeit for short periods under controlled conditions, had changed his life.

“To me it means a lot. I’m surprised at what we have been able to do. I think you’ve got to try the impossible to make the possible possible. It’s a lot of fun – it feels really good,” he said.

David comes across as an overwhelmingly positive person, but after his injury he had some dark moments.

All attempts at rehabilitation had failed, so he agreed to take part in a trial led by Dr Grégoire Courtine at EPFL. 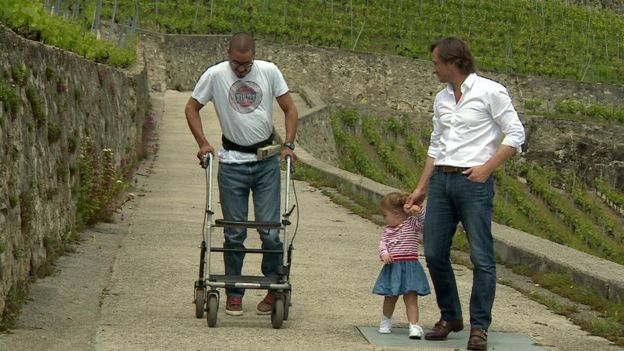 “I came with my daughter, Charlotte, who was one month old at the time. As we approached David, he looked her in the eye and said, ‘I will walk before you’.

“When Charlotte took her first step she was 14 months old, by which time David was walking by Lake Geneva. 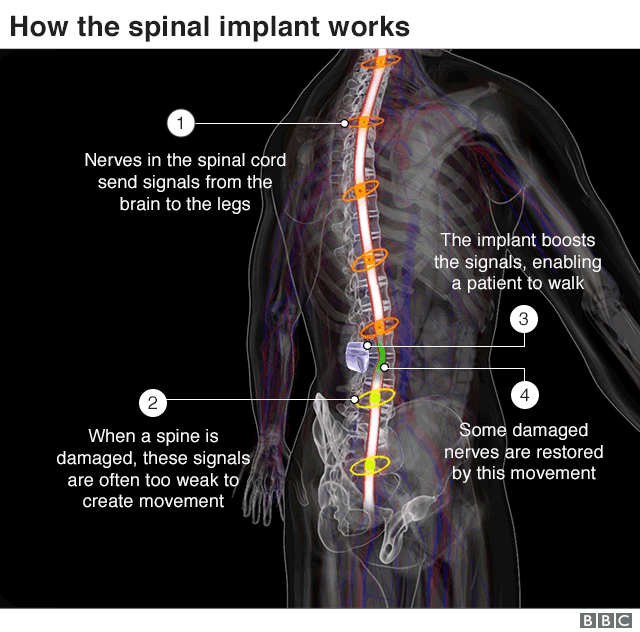 To Dr Courtine’s surprise, the spinal implant did more than enable David to walk.

“What was completely unexpected was the spinal cord repair that we observed.

“What we observed in animals is that it seems that the nerve fibres are regrowing and reconnecting the brain to the spinal cord,” he said.

The paralysed man who can ride a bike
Spinal implant ‘truly changed my life’
‘Woman paralysed after being ‘catapulted’ off bed
David had his implant surgically inserted by one of Switzerland’s leading neurosurgeons, Dr Jocelyne Bloch, from Lausanne University Hospital.

She told me that she was also astonished at David’s improvement.

David can now walk up to eight paces when his implant is turned off and this is the first time that this has been recorded in a chronic spinal injury.

Out of the lab, in the real world, it is hard for David to walk more than a few paces. The signals from the implant soon become uncomfortable and so can’t be used all the time.

The system is also expensive and not reliable enough to be used outside of the laboratory for day-to-day use, so it’s far from a cure.

Restoring movement and hope
David is the first of three patients who have benefited from the first wave of the treatment.

Two other men have also managed to walk again, to varying degrees. 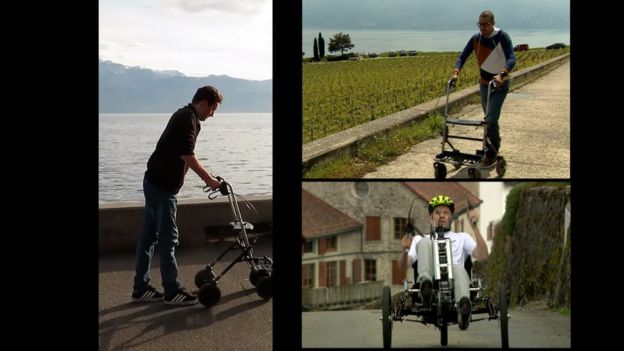 Gertan Oskan, a 35-year-old engineer from the Netherlands, was knocked over by a car seven years ago.

His doctors told him on his birthday that he would be paralysed for life. He is now beginning to regain some movement.

Sebastian Tobler, a 48-year-old man from Germany, was a keen cyclist who loved being out in the countryside before he was knocked off his bike.

Now he’s back on a specially adapted bike that is powered mostly by his hands – but also partly by his legs.

The researchers believe that their system will improve and restore some movement to people who had lost all hope of walking again.

They plan to begin larger trials in Europe and the US in three years’ time.

If these go well, the researchers hope the system could become more widely available.

Any cookies that may not be particularly necessary for the website to function and is used specifically to collect user personal data via analytics, ads, other embedded contents are termed as non-necessary cookies. It is mandatory to procure user consent prior to running these cookies on your website.